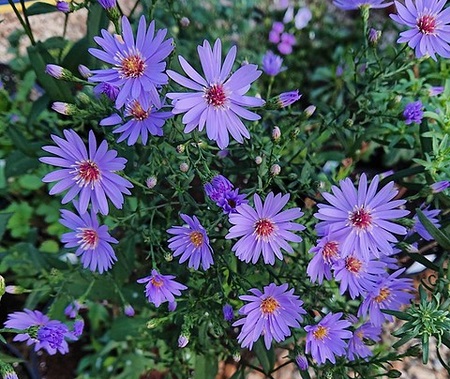 The Michaelmas Daisies are starting to come into their own and brightening up tired borders. This is one of my favourites - Aster 'Little Carlow' (https://shireplants.co.uk/aster-cordifolius-little-carlow/).

The perennial Asters, which include Michaelmas Daisies, are essential to prolong the flowering season of most gardens well into autumn.

When autumn tints are mostly reds and golds, Asters provide refreshing contrasts in whites, pinks, lavenders and purples. They will grow in sun or light shade and another advantage is that they come in a wide range of heights, to suit all purposes.

Michaelmas daisies were introduced from America in the 17th Century and became a cottage garden favourite. Those from New England took the name Novae-Angliae and those from the low-countries' settlements around New Amsterdam (now New York), were called Novi-Belgii.

Asters have largely been renamed Symphyotrichum but we are stick-in-the-muds and prefer the traditional name.