The Galium family of plants is often overlooked in the garden, but they provide a useful function for ground cover and they are also fantastic for pollinators. As with many native plants, they also have interesting mythology and legends surrounding them.

Galium verum, or Lady's Bedstraw (photo above) was voted the County Flower of Borsetshire in the popular radio soap, The Archers, in 2002. This meadow wildflower forms clumps of finely cut foliage topped with masses of golden flowers which fill the air with a honey scent.

Traditionally, the plant was used as a substitute for rennet to curdle milk for cheese. In Gloucester it was used to colour Double Gloucester cheese.

Before the advent of the modern mattress, Lady's Bedstraw was used for bedding thanks to its soft and springy quality and pleasant scent - it smells of hay when dry. It was also said to be one of the 'cradle herbs', the plants used to line the manger in which the baby Jesus was laid. A German legend tells that the manger was lined with bracken and Lady's Bedstraw. At that time the bracken had a flower, but the plant refused to recognise Christ's divinity, and so lost its flower. Bedstraw did acknowledge it, so kept its flower. 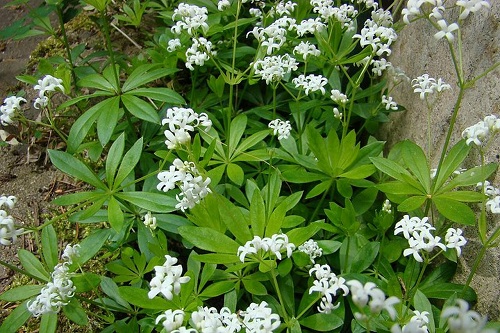 Galium odoratum, or Woodruff provides carpet-like ground cover under trees and shrubs where little else will thrive, or can be used to camouflage the foliage of snowdrops as it fades. Clusters of white star-like flowers appear in spring for several weeks. The dried foliage smells of hay and is used in pot-pourri.

Among the various powers attributed to this plant is apparently the ability to attract wealth and prosperity and if carried in a leather pouch, it will also help to protect against harm and ward off evil spirits. Other common names from around the country, include Hay plant, Blood cup, Kiss-me-quick, Ladies-in-the-hay, Lady's Needlework and Master of the Woods. 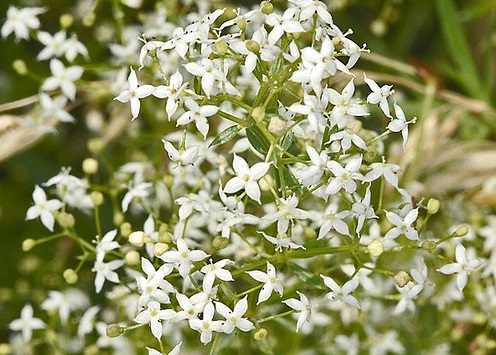 Galium album, or Hedge Bedstraw grows up through hedgerows and shrubs and is adorned with clusters of white flowers from spring through to late summer. Before the advent of the modern mattress, Hege Bedstraw was one of the plants used for bedding, thanks to its soft and springy quality and pleasant scent - it also smells of hay when dry.

For full details of the Galium plants we have, see here.