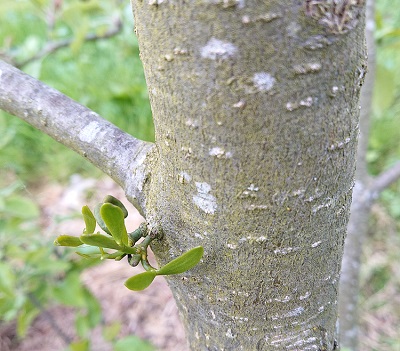 So excited that after several years of 'sowing' mistletoe berries on our apple trees, I finally have one that has taken (shown in the photo).

Mistletoe is semi-parasitic, meaning that it can produce it's own food via photosynthesis, but also attaches to a tree via sucker roots, which penetrate the bark and take minerals and water from the host tree. This may sound like it is not desirable, but doesn't actually harm the tree, provided the tree is healthy and the amount of mistletoe is managed.

There is very little mistletoe in the wild in our part of the country so I'm glad to now have it established in our orchard! The white berries are an important food source for the mistle thrush and fieldfares.

In the Middle Ages, it was believed that mistletoe had a variety of magical properties such as stopping epileptic fits and keeping witches at bay / warding off evil.

It was believed by the Victorians that the seeds of the mistletoe would only germinate if they passed through a mistle thrush. Although not true, research has shown that when seeds do pass through a bird’s guts, they will germinate faster.

A sprig of mistletoe is traditionally hung above the door and a berry removed with each kiss. The custom appears to date to at least the year 1500.

Much of the mistletoe now sold at Christmas is imported from northern France, although there is a small commercial UK trade centered around Tenbury Wells in Worcestershire. In the UK we have a little known 'National Mistletoe Day', usually on the first Saturday of December.