The 29th September, is Michaelmas, a Christian festival also known as the Feast of Saint Michael. St Michael is one of the principal angelic warriors, protector against the dark of the night and the Archangel who fought against Satan and his evil angels. As Michaelmas is the time that the darker nights and colder days begin, the celebration of Michaelmas is associated with protection during these dark months and with the beginning of autumn and the shortening of days; in England, it is one of the “quarter days”.

One of our favourite plants, the Michaelmas Daisies, are really coming into their own this month. As suggested by the old saying below, the daisy is probably associated with this celebration because St Michael is celebrated as a protector from darkness and evil, just as the daisy fights against the advancing gloom of autumn and winter.

“The Michaelmas Daisies, among dede weeds,
Bloom for St Michael’s valorous deeds.
And seems the last of flowers that stood,
Till the feast of St. Simon and St. Jude.”

(The Feast of St. Simon and Jude is 28 October)

You can view our Michaelmas Daisies here. 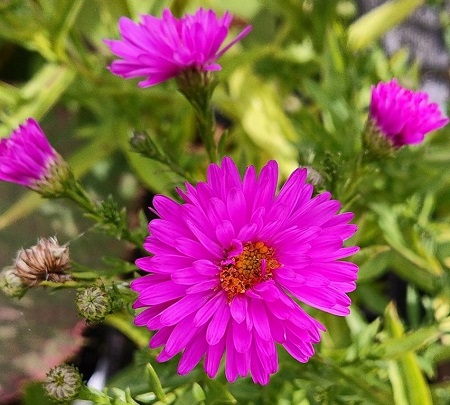